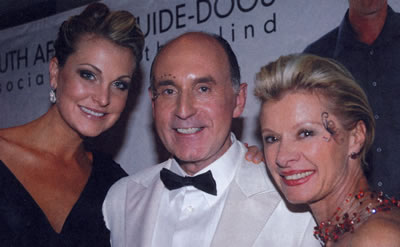 The Purina ‘Carnival in Venice’ Winter Ball
Saturday 23 June and the occasion is the Annual Winter Ball held at Monte Casino in aid of the S.A. Guide-Dogs Association for the Blind. Although the weather is chilly, you soon warm up in the wonderfully warm vibe inside. The ladies are beautifully dressed in glittering evening gowns and the gents cut dashing figures in their dress suits. Celebrities are plentiful as we recognise our favourite stars from different TV shows. Welcoming drinks are served in the foyer. The ballroom looks Venetian, the tables alternating with glass candelabras and red glass centre pieces. Suddenly the lights dim, almost to darkness, and a beautiful voice starts singing You Light Up My Life. Certain lyrics have been changed and you realise why as the spotlight opens on a shiny black Labrador lying peacefully at the feet of the young girl singing. Timmy Taylor is dedicating the song to her guide dog Dixie! Wow, what a start to the evening. Master of Ceremonies, Michael de Pinna, who was also patron of the ball, did us proud. Gone was the ‘Yebo Gogo” man as this eloquent gentleman kept the evening running smoothly and his rendition of Somewhere Over The Rainbow had everyone enthralled. The Revlon dancers entertained with a Dance of Seduction, which was enjoyed by all – especially by the gentlemen! One of our guide dog owners, Francois Jacobs, is the S.A. Latin and Ballroom Champion in the Visually Impaired Division. He and his dance partner, Caryl Misselbrook, did a demonstration for us. Well done Francois, you are a star. 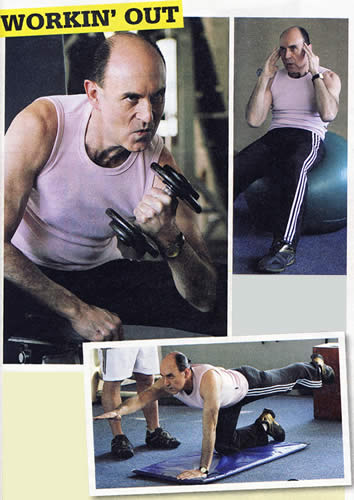 Gym Bunny
Michael de Pinna is looking leaner these days thanks to a gruelling exercise regime. The Vodacom funnyman is hitting the gym four to five times a week with cardio and weights workouts that are clearly showing results. “I’ve lost my boep”, Michael (54) says with a chortle. “At my heaviest I weighed 96 kg but now I’m a trimmer 74,5 kg.” He’s also watching his diet and cutting out no-no’s such as sugar and alcohol. “I used to be a runner but I stopped because of a back injury – which is why I put on the weight. I like the feeling you get after exercise and the discipline of it.” 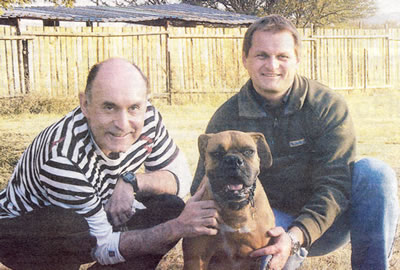 Dog Rescue
MICKEY the Boxer was rescued by actor Michael de Pinna, and brought to “Wet Nose” in Pretoria in March last year. After 15 months, he has now gone home with his new owner Sebastian. 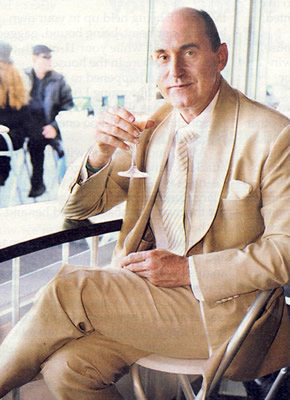 Actor and funnyman Michael de Pinna is the picture of elegance as he relaxes alongside the Durban track with a glass of champers. 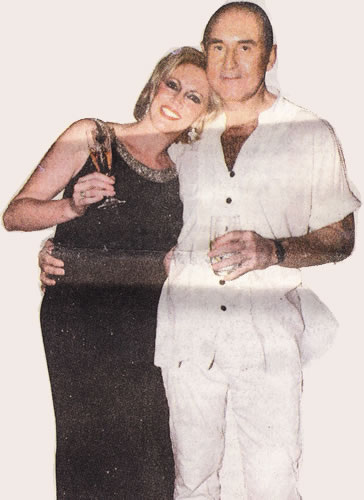 Michael de Pinna and Carolyn Steyn at her Sex and the City-style birthday party. The divorce settlement must have been a generous one.

Carolyn Steyn, who plays Khapela’s love interest, Barbara, in Generations, threw a very “Sex in the City” birthday party last Friday night at her penthouse in Sandton. She must have received a generous divorce settlement from her ex, Douw Steyn, who is head of Auto & General and who also owns the Saxon Hotel. The penthouse is one of those you only see in movies starring Michael Douglas and Catherine Zeta-Jones. A 360-degree view of our city and interior decor to match. Guests included Michael de Pinna, who unfortunately is more known by the public for being the Vodacom guy than for his excellent acting skills. 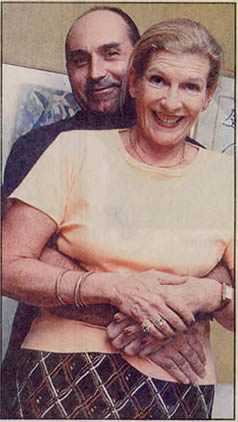 From Big Nerd To SUPERHERO!
Michael de Pinna the Yebo Gogo advert nerd, became a superhero when he saved the life of a friend.

At a house-warming party for Financial Mail senior editor Linda Stafford in Melrose, Johannesburg last Saturday, de Pinna pulled estate agent Chooky Stevens back from the brink of death as she choked on a piece of roast beef.

Reliving the incident which could have been scripted for one of the off-the-wall adverts, Stevens – partner to jazz saxophonist and music critic Don Albert – said she was enjoying snacks on the patio when things went wrong.

“I was eating, talking, laughing, everything at the same time,” she recalled. Suddenly something stuck in her throat.
“I tried to swallow hard, but it did not help. I took a sip of wine, and still it did not move,” she said.

Realising she was not getting air, she lurched around the patio. The people around her thought she was having a epileptic fit, or a heart attack.

Then de Pinna walked into the room. “I just looked in her eyes and I could see what was wrong with her,” he said. He performed the Heimlich Manoeuvre on her, and the meat “shot out”.

“I did it almost instinctively. I read about it (the maneuver).”

Stevens said she had thought she was going to die. “There was no doubt in my mind. But that didn’t stop me from running around like a beheaded chicken.”

Expressing her gratitude to the entertainer, Stevens said:” He was the jaws of life that brought me back from the jaws of death.”